Did you know you can play chords to most fiddle tunes just using no more than one finger?

On the fiddle, chords are generally played as doublestops — two strings played at a time. But chords are usually made up of three notes. Doublestops on the fiddle cover two out of three of those notes — any two out of three. This allows some leeway in playing chords. It also allows for some ambiguity, because two notes can be part of more than one chord. 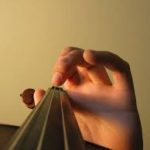 For example, major chords have 3 notes — the first, third, and fifth notes of the scale. A D chord is made up of the D, F# and A. (D minor is simply D, F, A, because it’s the third note of the scale that determines whether it’s major or minor.)

To play a doublestop D chord means playing two of those three notes. Could be D and F#, F# and A, or D and A. The easiest of these is simply to play the D and A open strings. Playing these two open strings will fit in any time a tune calls for a D chord.

You can find written chords for many tunes and experiment playing along with recordings of the easier ones. Just about every tune on fiddle-online.com has a listening and a playlong track that you can try your chords on!  This helps train your ear to hear how those chords sound when played with the tune.

Many tunes in the major key use the I, IV, and V chords, which means they use three different chords in the tune — one chord built on the I, or key of the tune. If in D, this would be the D chord. The IV is built on the fourth note of the scale, which in the key of D is a G. And the V in the key of D is the next note up, the A. In other words, the I, IV, and V chords in the key of D are the D, G, and A chords — in each case creating the chord by using the 1st, 3d, and 5th notes of the scale.
But as we noted, in fiddle doublestops you’ll only use 2 out of 3 of those chord notes in order to suggest the chord during a tune in D.

How do we play those doublestops? We already found the D chord, which can be played with open D and open A, the 1st and 5th notes of the D scale. Now the IV chord is a G chord, which uses G, B, and D. If we’re working with the D and A strings, we can play two of the three G chord notes most easily by using the open D and first finger on the A string — the B note. Meanwhile we can find the V chord, the A chord, by choosing two of its three notes, which are A, C# and E.

Being able to play I, IV, V in the keys of G, D, and A covers a tremendous amount of ground when talking about fiddle tunes.

And we haven’t even begun to discuss minor keys or double-tonic tunes such as the many Celtic and American folk tunes which play the key chord and the one below (equivalent to I and VII), and many of those patterns can also be done with no more than one finger!

One thought on “Playing Chords with 1 finger!”