Mexico has a long and varied history of musical culture, and the fiddle/violin has played an important part in this history.

One of our guest fiddlers, Osíris Ramsés Caballero Léon, comes from the Huasteca, on the east coast of Mexico, an area the Huastecans controlled for 700 years until the Aztecs moved in — only to be ousted 50 years later by the Spaniards. The traditional ensemble in Huasteca is a trio featuring the fiddle backed by complicated rhythms from treble and bass guitars — and all the musicians sing as well.

Another part of Mexico with strong fiddle connections is in the southwest, an area called Tierra Caliente. One of our workshops allows you to learn a tune from that area. Paul Anastasio has learned from experts in that region of Mexico, and in the videos for his fiddle-online concert/workshop, he performs various tunes from there as well as teaching a popular Mexican foxtrot. Click here for details.

Mariachi music and salsa are popular in Mexico and the fiddle plays a strong role in each, though we don’t have workshops in this music as yet on the site. Mexico also has a strong history of classical violin, ranging from baroque musicians who moved there from Spain and Italy in the 17th and 18th centuries, up to more recent musicians, such as one of the world’s best solo violinists, Henryk Szeryng. He became a Mexican citizen after Mexico took in 4,000 Polish refugees from WWII in 1942. Szeryng became Mexico’s ambassador for culture, the first artist to travel on a diplomatic passport.

The violin was an important jazz instrument among both black and white players, especially in the first half of the 20th century. The European Roma took to it and many became virtuoso jazz musicians, including the great guitarist Django Reinhardt, best known as fiddler Stephane Grappelli’s other half in the Hot Club of France. 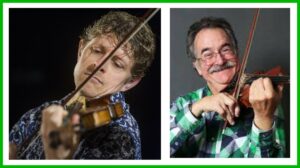 We’re very fortunate on fiddle-online to have a detailed concert/workshop on this style of music, still called “gypsy jazz,” by one of the great exponents, Tim Kliphuis, who teaches at the conservatory of music in Amsterdam. In his online concert/workshop, he not only plays some of this great music, but also tells how he got to know and work with the Roma and gained their respect for his playing. The learning part of the workshop is very detailed, including a simple jazz tune, plus jazz riffs to practice, and a sample solo to work on. Click here for audio and details. (Note, because of the extensive detail and length of this workshop, the cost is 8 credits instead of 6. Keep in mind that as with all fiddle-online workshops, 80% goes to the artist.)

On the other side of the Atlantic, in the U.S., various styles of jazz were being developed. One of the great American jazz fiddlers was Joe Venuti, who had an adventurous, heartfelt, sometimes spare, sometimes raucous sound. Our guest Paul Anastasio took lessons with Joe Venuti back in the day, and shares with us some of his style of swing jazz fiddle, including a performance of various tunes, and the teaching of the standard “Avalon,” featuring both the basic tune and a solo improv-style version Paul composed for people to learn and develop riffs and variations. Click here for more details and signup — scroll down to Paul’s second offering for the jazz fiddle selection.

Whether it’s new to you or you’re an expert, there’s a lot to learn from these concert/workshops. Even if jazz is not your thing, try it! It expands your technical and musical abilities when you stretch toward the horizons of what jazz fiddle has to offer!